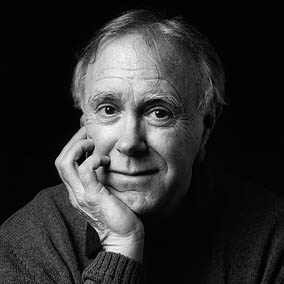 After seeing Mary Karr and Lyrae Van Clief-Stephanon at the Folger Shakespeare Theater earlier this year, I returned to the beautiful space on Monday night to hear Robert Hass read. Robert Hass is a former U.S. Poet Laureate, active poet, translator, and professor at the University of California – Berkeley. (For more, read his biography on the Poetry Foundation’s website.)
Translation
Hass read a number of his translations of the Polish poet Czeslaw Milosz and Japanese poets. As a speaker of few Polish words, Hass worked closely with the poet and other Polish speakers. When asked about translating poetry from a language he doesn’t know intimately, he joked that it is “like making love with gloves on. You’re never quite sure what’s happening.”
Hass shared stories about working with closely with Milosz in California. One story, about a series of poems that began both “Oh!” and “O!”, had Hass wondering which one Milosz intended. While discussing which one might have a longer, more thoughtful exclamation vs. a more spontaneous response, Milosz said, “Life is so short that anything you can say, ‘oh!’ about, you should.”
Writing Prompt
During the question answer period, Hass answered a question about his theory of writing. He recounted seeing an interview with Henri Cartier-Bresson in which the photographer was asked about his theory of photographing. Cartier-Bresson held his hands up and mimicked taking a picture as he shrugged. Hass said that he has the same view of writing. After hearing the interview, he was inspired to write a daily series of prose poems, only some of which developed into full poems, in which he captured scenes from everyday life.
Hass recommended trying this exercise: Everyday, sit somewhere and record exactly what you experience with your five senses. The attention to the present, your surroundings, language, light, etc., will help you to become a stronger writer.
Writing Suggestion
Regarding writing, he also recommended writing at different times of the day. Many authors will have set schedules (for example, writing for a certain number of hours every morning), but he has found that trying different periods of the day allows him different kinds of insight in his poetry.
The breadth of Hass’ knowledge is rooted not only in poetry, but also the natural world. A kind, thoughtful and engaging storyteller, his reading was both invigorating and inspiring. At one point, he described poetry as "catching lightening in a jar." He's a poet I can believe in.

You can watch him read poetry at the Dodge Poetry Festival on Youtube.

I look forward to attending readings at the Folger next fall. See you there?
Posted by Chloe Yelena Miller at Wednesday, May 18, 2011