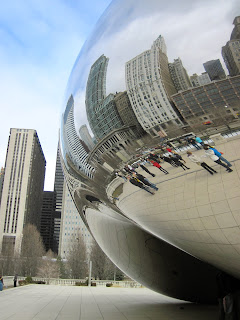 The Bean in Chicago: We might have expectations of tourists,
but who are each of these individuals?

Fiction and creative non-fiction authors will ask how to craft an authentic character who initially appears to fit a stereotype. Their goal, of course, is to avoid this and create someone new.

Here's a writing prompt to help you avoid this trap:

Choose a character you’re working on or create someone who, on the surface, might appear to be a stereotype. For example, a grandmother figure offers certain expectations (encouraging you to eat second helpings, calling you too early in the morning, inviting you to come by daily, asking why you aren’t married/don’t have kids yet, etc.) But, you know your grandmother to be a particular woman – one with unique experiences and concerns. Let the reader see her uniqueness through details.

For this prompt, craft a scene in which this character is in a particular place (setting) and doing something (plot.) It can be something simple like ordering or making a cup of coffee, or something more dramatic, like responding to bad news.

Write for at least ten minutes nonstop. Set a timer, if you like. If you get stuck while you're writing, simply repeat something like, "I'm breaking a stereotype." Eventually you'll get bored and return to the scene. Of course, if the prompt brings you somewhere else, that's fine, too. A prompt is meant to get you started, not to tell you where to end up.

When the ten minutes are over, re-read what you've written and underline the most interesting ideas, images or lines. These particular words and lines, as well as the brainstorming, might offer you the beginning of a new piece or help you to better understand the character you’re developing for a larger piece.

Posted by Chloe Yelena Miller at Wednesday, January 30, 2013 No comments: Links to this post

I’ll be reading with D.C.-area poets Merrill Leffler and Yvette Neisser Moreno. We will each read from our newest poetry collections at Politics & Prose Bookstore.

Merrill Leffler published two collections of poetry before Mark the Music, Partly Pandemonium, Partly Love and Take Hold. With Neil Lehrman in the late Sixties, he founded Dryad, a poetry magazine, which evolved into Dryad Press. A physicist by training, he worked for NASA in rocketry before leaving for graduate school in Literature at the University of Maryland and Oxford University -- he went on to teach literature at Maryland and the U.S. Naval Academy, before returning to College Park and the University’s Maryland Sea Grant College Program where he wrote about Chesapeake Bay science and policy. He was a founder of The Writer’s Center and lives with his wife Ann Slayton in Takoma Park, where he is currently the city’s poet laureate.

Chloe Yelena Miller's poetry chapbook, Unrest, was recently published by Finishing Line Press. Her work is published or forthcoming in Alimentum, The Cortland Review, Narrative Magazine, Poet’s Market, and Storyscape Literary Journal, among others. Chloe has an MFA in creative writing from Sarah Lawrence College. She has participated in the Bread Loaf Writers’ Conference, the Vermont Studio Center residency and the A Room of Her Own Writers’ Retreat. Chloe teaches writing online at Fairleigh Dickinson University, George Mason University and privately, and leads writing workshops at Politics & Prose Bookstore in Washington, D.C.

Yvette Neisser Moreno’s first book of poetry, Grip, won the 2011 Gival Press Poetry Award and will be released in Fall 2012. She is co-translator of South Pole/Polo Sur by María Teresa Ogliastri and editor of Difficult Beauty: Selected Poems by Luis Alberto Ambroggio. In 2012, she was the first runner-up for the Maureen Egen Writers Exchange Award. She has recently taught at The George Washington University, Catholic University, and The Writer's Center. Yvette is the founder of the DC-Area Literary Translators Network (DC-ALT and serves on the programming committee of Split This Rock Poetry Festival.

In my memoir writing workshop at Politics & Prose bookstore, we spent some time defining fact and truth (or belief). A student added the term authenticity.

On the surface, these terms seem quite straight-forward. When they are applied to memoir, a focused examination of an element of someone’s life, they become murky. I’d argue that facts are quite straight-forward. Truth in a literary setting, however, is a larger concept regarding what someone truly believes. For example, truth could relate to rules about how someone conducts a life, spiritual beliefs or even smaller issues like how to best prepare a good cup of coffee. We should all agree on facts, but it is possible that we will disagree about truths.

In this sense, the author needs to consider what she believes. A good beginning exercise is to write a draft for This I Believe. This format asks you to describe one of the main truths you hold about the world. That is to say, how do you live your life and how do you know this?

One important aspect of writing is the emotional truth of a piece. This isn’t a belief about the world, but rather your emotional response to an event. Determining what the emotional truth is will help to guide your plot, tone and point of view. It will also help you to connect with a reader who has experienced that emotion (but not the event.)

When writing memoir, an author will choose moments, in the form of scenes, to include. These scenes will then stand in for many moments in a life. After all, it is impossible to tell every story in a life, and it probably wouldn’t be that much fun to read them all. Instead, the scenes represent relationships, regular occurrences, themes, and more.

So, does that mean that a stand-in scene is authentically representative of all facts and truths that an author may hold? The author should work to be as factual and truthful, including to his or her opinions, while writing. If the author is being faithful to his or her memories and emotional truth (which could also be called a “universal truth”), then the scene should read authentically.

Here are some wise words from William Zinsser, author of the classic guide On Writing Well, on NPR:

If you are interested in taking the memoir writing workshop at Politics &Prose bookstore in Washington, D.C., there are still spaces available for the March class.
Posted by Chloe Yelena Miller at Wednesday, January 23, 2013 No comments: Links to this post

Poem Published by the Postcard Press 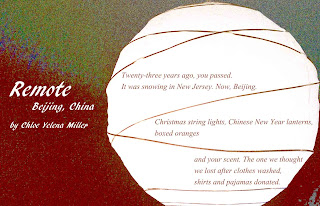 Remote published by the Postcard Press

I’m excited to have my poem, Remote, designed beautifully and published on a postcard by the Postcard Press. Please click through to the press to purchase your copy and support this venture.

I wrote Remote last January while traveling in China with my husband. I was thinking of my friend who passed when we were in the seventh grade one snowy January day twenty-three years earlier.  I’ve written about this dear and missed friend often.  There are some poems about her in my upcoming collection, Unrest. If you log in, you can read another poem dedicated to her memory in Narrative Magazine.

I’m really fond of postcard poetry. Participating in ConcreteWolf’s poetry postcard project in 2011 got me started. Then I started two poetry postcard series, which are for sale in my Etsy store. The first one is a series of narrative poems about my Great Aunt Dora paired with images of her.

You might remember an earlier interview with Caitlin O’Sullivan, founder and managing editor of the Postcard Press.
Posted by Chloe Yelena Miller at Tuesday, January 15, 2013 No comments: Links to this post

Reflecting Back on The Year of Health 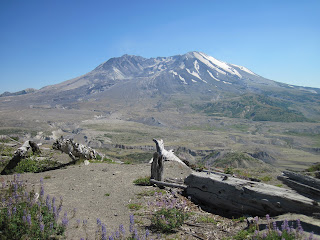 Doing Something Else: Visiting Mount St. Helens this summer

Last January I declared 2012 THE YEAR OF HEALTH. I’m happy to report, one year later, that I’ve made some substantial changes in my lifestyle. I expect that 2013 will continue with this positive trend (and writing it here will help to keep me accountable, right?)

We all want to feel good, live longer and experience productive, ideally thrilling!, days. For writers, this includes being alert to the world and then translating that attention into well-placed words.

Aside from writing and work goals, I had four main categories that I wanted to improve upon last year:
Exercise
Get out of the house for fresh air and sunshine
Fresh food
Do something else
As a workaholic and busy writer, these were the areas that most often got neglected. Exercise and getting out of the house went hand-in-hand for me since 2012: I now try to take advantage of the nice weather by taking a two mile walk a few times a week. I usually listen to poetry podcasts or spend some quiet time reflecting on a piece of writing.

We joined a CSA again last year and I’ve been cooking with more whole grains and nutrient-packed foods like chia seeds (here are some favorite new cookbooks). As for “doing something else,” there isn’t always time, but I have been going to more readings, museums and generally doing more sight-seeing in our lovely nation’s capital.

Of course there are weeks when all of this falls through the cracks, like holiday eating or final-paper-grading-time, but overall, I’ve started to form healthier habits. What lifestyle goals did you meet last year that fed, literally or figuratively, your writing? How will you continue them this year?

Click through for more on specific writing goals and making the time to meet them.
Posted by Chloe Yelena Miller at Monday, January 14, 2013 No comments: Links to this post