Gearing up for National Poetry Month

April promises the end of winter (right?!?) and a whirlwind of poetry. As I've done in the past for National Poetry Month, I'll be hosting guest writers all month here on the blog. Stay tuned for some great pieces on writing, editing, submissions and more by published authors.

I'm excited to be reading at the Georgetown Neighborhood library with Finishing Line Press poets on April 9th and at the Chevy Chase D.C. Public Library on April 23rd with recent poetry chapbook authors.

For more D.C. literary resources, scroll down to my list of DC Area Literary Readings, Festivals & Resources on the right side of this blog. (Please let me know if I've forgotten anything.)

For a monthly poetry calendar, follow the Beltway Poetry Quarterly's Poetry News.
Posted by Chloe Yelena Miller at Monday, March 24, 2014 No comments: Links to this post

D.C. area friends, we hope to see you on Wednesday, April 9th for a poetry reading at the Georgetown Neighborhood Library.

You're welcome to RSVP on the Facebook invite page. Thanks for helping to spread the word!

David Ebenbach is the author of Autogeography, a chapbook of poetry, and two collections of short stories: Between Camelots, which won the Drue Heinz Literature Prize and the GLCA New Writer’s Award, and Into the Wilderness, which won the Washington Writers’ Publishing House Fiction Prize. Ebenbach has a PhD in Psychology from the University of Wisconsin-Madison and an MFA in Writing from Vermont College. He teaches creative writing at Georgetown University. Find out more at www.davidebenbach.com.

Chloe Yelena Miller’s poetry chapbook, Unrest, is forthcoming from Finishing Line Press. Her work is published or forthcoming in Alimentum, The Cortland Review, Narrative Magazine, Poet’s Market, and Storyscape Literary Journal, among others. Chloe has an MFA in creative writing from Sarah Lawrence College. She has participated in the Bread Loaf Writers’ Conference, the Vermont Studio Center residency and the A Room of Her Own Writers’ Retreat. Chloe teaches writing online at Fairleigh Dickinson University, George Mason University and privately, and leads writing workshops at Politics & Prose Bookstore. www.chloeyelenamiller.blogspot.com.

W. M. Rivera grew up in the Irish Channel of New Orleans, from the mid-1930s until 1950. He has traveled widely on international agricultural development assignments. He retired as professor of agricultural extension education from the University of Maryland, College Park, in 2009. He began writing poetry early on and published a book of poems titled “At the End of Legend’s String” (Views Press, 1960, Washington, DC. Although he wrote poems throughout his career, after retirement he returned to writing poetry on a regular basis. He currently resides in College Park, MD.

Pia Taavila-Borsheim has a B.A. and M.A. in American Literature from Eastern Michigan University and her interdisciplinary Ph.D. is from Michigan State University in the fields of English, Sociology and Philosophy. She teaches literature and creative writing at Gallaudet University in Washington, DC. Her collected poems 1977-2007, Moon on the Meadow, was published in 2008 by Gallaudet University Press and Two Winters, a chapbook, was published in December 2011 by Finishing Line Press. Her poems have appeared in such journals as Threepenny Review, Birmingham Poetry Review, storySouth, The Asheville Poetry Review, 32 Poems, Measure, Ibbetson Street Review and The Southern Review, among others.
Posted by Chloe Yelena Miller at Tuesday, March 18, 2014 No comments: Links to this post 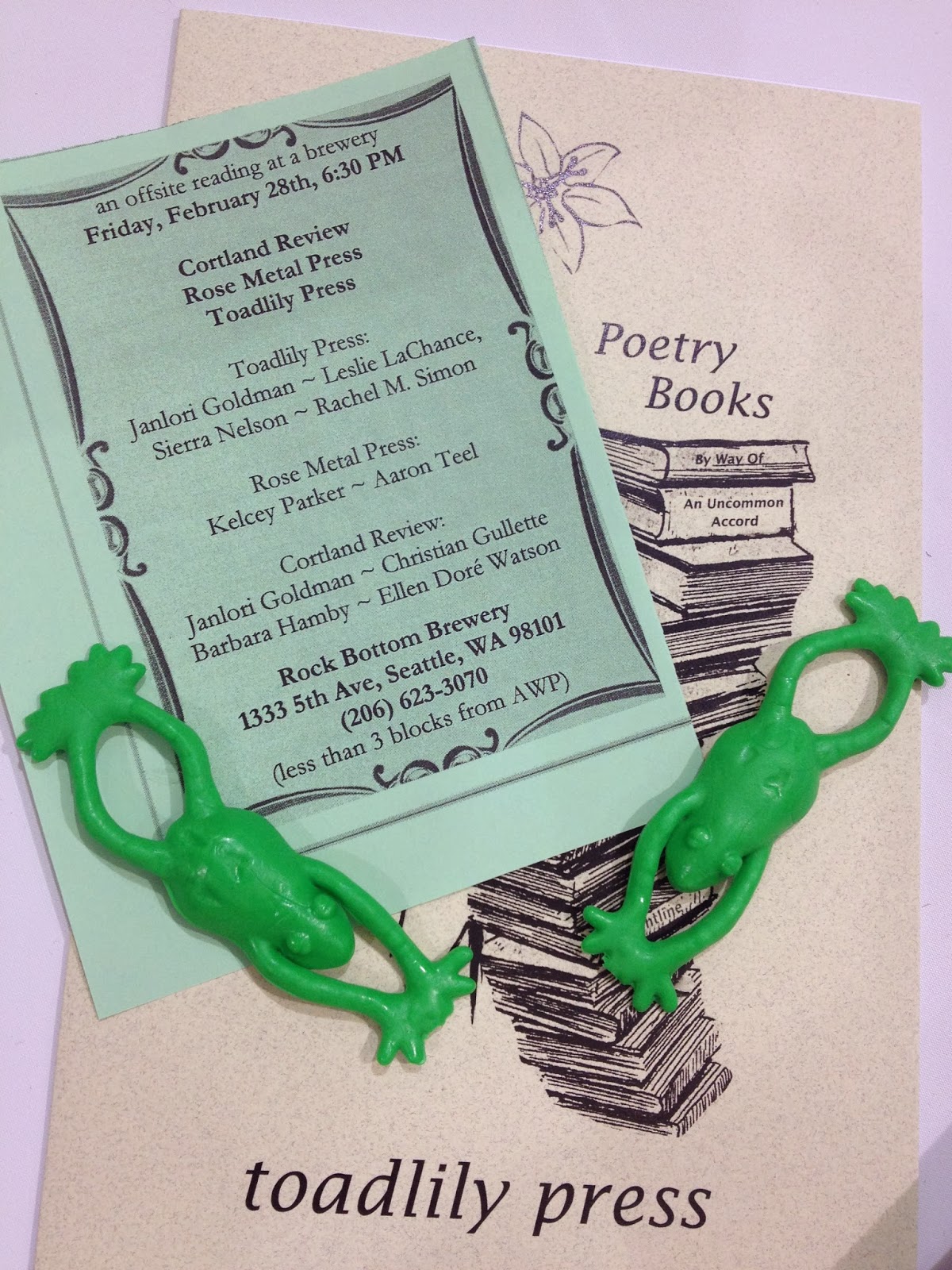 We all leave, or at least hope to leave, the annual AWP conference with a long list that includes submission opportunities, contests, residencies, names of new friends and new books and journals.

How to make sense of that precarious pile on your desk?

Be sure to go through it all before you forget what your scribbled notes mean. Keep lists of places to submit (you might organize them by deadline or project.)

I have strict rules about where books and journals belong. Books I’ve read are allowed on the shelves. If I haven’t read them yet, I have other piles organized by full length books, journals and craft books. Poetry, fiction and non-fiction are separated. Yes, there are a lot of piles and while it sounds organized, it isn't neat (other suggestions?) Between the books I already have, library books and new books, I think I’ve got the next few months (even the year?) laid out for me.

Do keep in touch with the people you’ve met. For the folks you've connected with, write emails, follow their blogs and friend them on FB.

Posted by Chloe Yelena Miller at Tuesday, March 11, 2014 No comments: Links to this post

Thank you to Rachel Simon for organizing our AWP panel, Don't Hate Your Life: Redesign Your Comp Class. The attendance was amazing - standing room only!

One attendee asked if we'd be sharing the documents that we discussed. Kamilah Aisha Moon has generously offered to share her grading rubric and peer review guidelines (click through the link to download the documents from Google Documents.)

Kamilah Aisha Moon's work has been featured in several journals and anthologies, including Harvard Review, jubilat, Sou’wester, The Awl, Oxford American, Lumina, Callaloo, Superstition Review, Villanelles and Gathering Ground.  Her poems and prose have been nominated for the Pushcart Prize. A teacher of English and creative writing at various institutions, Moon is the author of She Has a Name (Four Way Books) and holds an MFA in Creative Writing from Sarah Lawrence College.
Posted by Chloe Yelena Miller at Tuesday, March 04, 2014 No comments: Links to this post

I'm looking forward to leading a *free* Memoir Writing Workshop at the Georgetown Neighborhood Library on Sunday, March 9th from 2:00 - 4:00 p.m. I'd love to see you there!

Here are the details:

Memoir Writing Workshop (free!)
Georgetown Neighborhood Library
Sunday, March 9, 2:00 - 4:00 p.m.
A memoir can be about a sliver of your life that was momentous in some way to you - choices you made, life-changing events, or people that influenced you. It can start anywhere, and move around in space and time, aiming for personal and emotional truths.

I will teach you how to craft a scene. There will be some in-class writing in response to prompts. You will have a chance to discuss your work and, if applicable, larger projects. Please bring pens and paper, or a charged laptop.

There is a small parking lot next to the library and plenty of street parking.

Click through to register. You're welcome to, although it isn't required, to RSVP on the event's Facebook page.

Posted by Chloe Yelena Miller at Sunday, March 02, 2014 No comments: Links to this post